Stereotypes: What Can We Do? 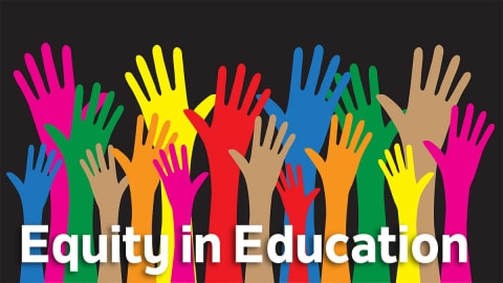 Throughout the school year, the Hallmark will focus on various student voices and groups. Maelada (May) Yowell approached the Hallmark and expressed interest in sharing her experiences with stereotypes and what people can do to be more understanding.

Some may argue that racial stereotypes are not as prevalent in society as they once were.  However, if you ask and listen to people, it is evident that racism, discrimination, and prejudice are still issues.  In many school systems and workplace environments, including BCPS, efforts are being made to create a safe place where people can have open and meaningful conversations about not only race and culture but also gender and sexuality.

Baltimore County Public Schools has made efforts, in recent years, to reduce these injustices with training and conversations lead by the Office of Equity and Cultural Proficiency.   Each Baltimore County Public School has an equity team which focuses on “affirming the culture and humanity of students, families, and the communities they come from.”

On a school-based level, Perry Hall High has always welcomed and encouraged students to join or create groups to represent the growing number of diverse students and their voices.  There are many different groups at PHHS including the Asian Student Union, Black Student Union, and the newly formed, Muslim Student Association.

According to a presentation recently shared with PHHS school staff, in the past 20 years, there has been an increase in diversity; however, there are also been an increase in test scores and attendance, including higher scores as compared to the BCPS average.  And suspensions have decreased.

Some have argued, particularly on social media, that Perry Hall has declining academics and student results due to the increase of diversity.  However, in recent surveys completed by PHHS students, more than 80% of students have reported that PHHS has done its part in preparing students for their future.

To increase understanding of each other and to encourage students to become more, it’s important to educate people about the harm their assumptions and conforming to stereotypes can cause.

Maelada (May) Yowell, freshman, knows all too well how those assumptions can be harmful to an individual.

Each English 9 class assigns a Student Service Learning project in which each student identifies a social issue and an action plan.  In May’s case, she wanted to reach a larger audience in order to address the stereotypes she faces as an Asian student.

May is a Thai-American student.  May has primarily faced the stereotype that because she is Asian, she is Chinese, when in fact, there are over 48 Asian countries.

When May was younger, students referred to her as “Ching-Chong” and wouldn’t play with her.  She also said that people made assumptions about her.

“[I’m tired of people] stretching their eyelids to make them appear smaller, assuming I’m from China, like the rest of Asia doesn’t exist, and that I only eat rice,” said May, a student in Ms. Yenscik’s class.

Race and culture can be touchy subjects but May has some suggestions which are listed below that while they may sound simple, are often overlooked.  May believes that being more cautious with our words and actions can guide individuals away from offending and towards understanding

When questioning the race or traditions of others, it is better to ask rather than assume. Lots of people have different ethnicities and/or traditions that they would love to inform you about. Assuming what someone is or does can be hurtful to them and can even come off as arrogant. Asking is a respectful way of learning more about someone.

Don’t make fun of someone for his or her culture.

When asking about another’s culture, make sure to think about the question you are asking. For example, is it respectful? Would I offend the other person? How would I feel if someone asked me this? If you answer yes to any of these questions, it might be a good idea to reword your question or choose another topic to talk about.

Be open to new cultures.

Learning about new cultures can be very enlightening and interesting but it can also be challenging if you aren’t familiar with the culture. Remember that not everyone is the same and every new cultural point you hear about can be turned into a fun learning experience.

Let go of your pride.

If you find that you are being corrected about someone’s culture, try not to take it to heart. Everyone has different ways of doing things so that what you heard from one person could be different from what you hear from another.

In order to continue the path toward equity and open communication, next month, the Black Student Union will be featured.