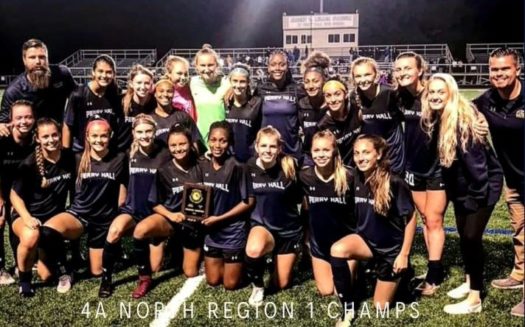 The Girls’ Varsity Soccer team will play their state semifinal game against Montgomery Blair High School at Gaithersburg High School on Saturday, November 9 at 5 p.m.  Lead by Coach Matt Smoot, this game will determine who will play in the Maryland state finals.  The team is currently 11-6.

The team has played in a Regional Championship game four times in the last four years, winning regionals three times, and winning states once.  In 2016, the team made it to states but finished as runner-up.  Defending their 2018 4A State Championship title, the lady Gators have worked hard all season.

“Mackenzie Click, Aya Neal, Caroline Rosenthal, and Caroline Warns play on our Backline of 4.  All seniors; they are the backbone of our team.  Freshman Kamryn Williams, Sophomores Analyn Weyant and Mariah McQueen, and Senior Erin Marciszewski account for 70% of goals scored,” said Coach Smoot.  “Sophomores Kyleigh Gough and Hannah O’Guin have done excellent work in our central midfield, and both of our goalies, Junior Brenna Ellenberger and Delaney Forrester, keep getting better.”

The Gators won against Eleanor Roosevelt High School on Friday, with a final score of 4-1, with goals by Kamryn Williams, Analyn Weyant, Kyleigh Gough, and Erin Marciszewski.  Going into semi’s, the Gators are on a six-game winning streak.

“State finals have now been about tuning into our full potential.  Our motivation now comes from wanting one more game, one more practice, one more day together as a team.  Our goal, every year, is to play for a state championship, but that requires a huge amount of work,” Smoot said.

While the Gators have been in this position before, every season is different.  Coach Smoot believes senior players have the ability to keep the team calm in big games.

“We have high expectations for the team, and in order to achieve these expectations, we know we have to work hard in every game and in practice, and push each other to be our best every day,” said Aya Neal, senior, one of the team’s captains.

Even with the game in Gaithersburg, the team is hoping for a big turnout on Saturday.