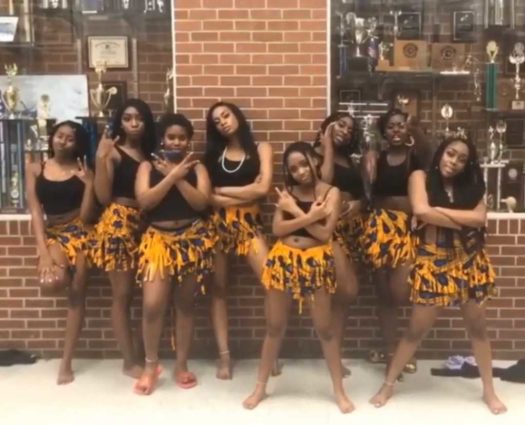 ▲
The BSU African Dancers, a group of students from PH.
Fatou Sonko

▲
The BSU African Dancers, a group of students from PH.
Fatou Sonko

The Black Student Union (BSU) is a club at Perry Hall High School, created only three years ago. Just last year some students came together and made a dance group, BSU African Dancers, which is centered around the African culture.

“I joined because there is not a lot of African culture showcased in the school,” Lingbay Woahtee said, a junior and member of the dance group.

BSU African Dancers is the only group that is centered on the African culture. Their dances are typically to African music and their costumes consist of African fabrics. They even incorporate some dance moves that are currently popular in Africa.

“It’s like a family dynamic, because we all can relate to the same things,” said Lingbay.

Members of the dance group consider each other family. Last year they had a student join who was not of African descent.  Before she joined, she had never danced to African music or did African dance moves. However, the whole group banded together to help her learn and make her feel a part of the “family” even though she wasn’t African.

“We’re worried about the dances, but we still manage to have fun,” said Mariatou Touray, junior.

The members of the team take this dance group very seriously. They make sure they get their dances perfected before they perform. They don’t consider the group as a chore but more as a fun after school activity that they are very passionate about.

“Our dances definitely have a lot of wow factors, because people at Perry Hall aren’t used to African dances,” Mariatou explained.

Last year the group performed for the first time at the school’s winter concert. Many people in the audience were very intrigued by the group and their dance moves and music choices. This was mostly because it was many of their first times seeing this in person.

The group is trying to be more involved in planning events on their own. Instead of seeing them only at the winter concert dancing, they also want to dance at future BSU planned events.

“We are performing at this year’s tailgate for the first time. We will also perform at the Winter assembly and winter concert,” said Mariatou.