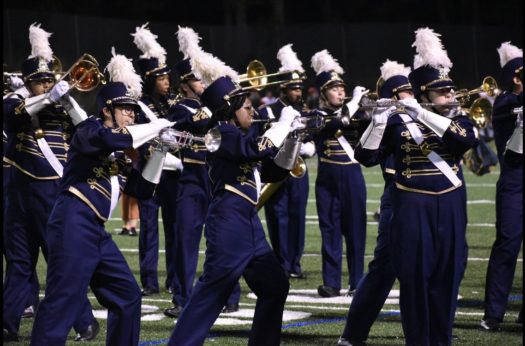 One of the Perry Hall band directors, Mr. Engel, and the Towson director, Mr. Rhen, have been trying to do something like this with their marching bands since last year. This was when the Perry Hall Marching Band stopped competing and became a parade band, freeing up a lot more time for playing at away games. Unfortunately, due to the rain last year, Towson’s marching band was unable to come to Perry Hall when their football team played Perry Hall’s.

“No other marching band in the county has tried anything like this, since at least as long as I’ve been at Perry Hall,” said Mr. Engel. “Mr. Rhen and I were hoping to set up a trend between Towson and Perry Hall so that it becomes a tradition for the marching bands to travel away for games.”

Both directors see this as a way for the students in the Perry Hall and Towson Marching Bands to create and strengthen relationships with other band kids in the county. It provides them with a unique experience that they didn’t have access to before.

“I’m excited to go to another school for a game because we’ve never done it before and it gives us a chance to spend time with new people that enjoy the same things that we do,” said Jessica Scott, a senior in the Perry Hall Marching Band.