Beauty and the Beast – Preview of the Musical 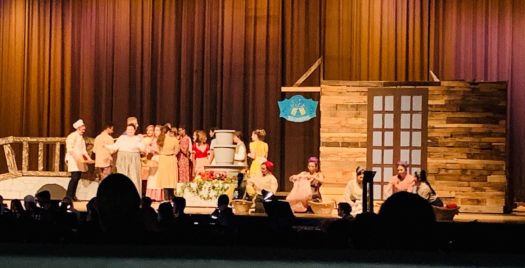 ▲
Students performing a scene from Beauty and the Beast during the feeder school preview on Feb. 28.
Tatyanna Alger

▲
Students performing a scene from Beauty and the Beast during the feeder school preview on Feb. 28.
Tatyanna Alger

On Wednesday, February 27th, multiple PH feeder schools were invited to preview the PH Theater Department’s production of “Beauty and the Beast.”  This preview was in preparation for the weekend performances: March 1st at 7pm and March 2nd at 2pm and 7pm. The leads of the play are Alexis Arthur, senior, playing the role as Belle and Kameron Marcellino, senior, playing the role as the Beast.

There were multiple singing performances, including “Belle,” “Gaston,” and “Be Our Guest.”

“We practiced since December and have practiced every day after school, sometimes till 5,” said Alexis Arthur, “Belle.”

The theater department typically performs a fall and spring play with production starting after the winter play, The Birds.

Abbie Morawski, freshman, participated in theater in middle school, but she appreciates the intensity of a high school performance.

“It’s longer than the junior version (middle school version) so we can do more with it. It’s a lot of fun,” said Abbie Morawksi, who plays Madame de la Grande Bouche.

Others like Nick Hamilton, junior, enjoy specific songs, like “Be Our Guest.”  Hamilton reflected on try-outs and practice leading up to this week.

“The first day we had a dance, and we had to learn that whole dance to ‘Be Our Guest,” said Hamilton who is playing Lumiere, the candlestick.

After learning the dance, students sang and acted.  Eventually, there were callbacks and the assignment of specific roles.

A lot of work was put into every aspect of the musical including costumes, which were created by the Drama Learning Center in Columbia, Maryland.

Teachers, Mr. John Pusateri, Mr. Scott Engel, Ms. Stephanie Plitt, Mr. Christian King, and Ms. Soule are credited with the production, design, and preparation for the play.  The play was directed by Mr. Worthington, a teacher at Pine Grove Middle.