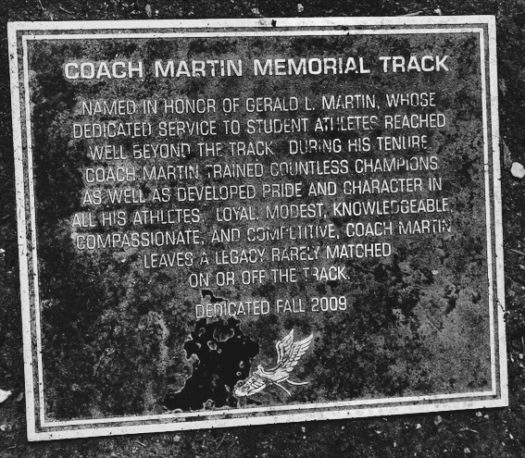 Jerry Martin although originally hailing from Hereford High School and began coaching at Dundalk, greatly influenced the students and community of Perry Hall. Martin transformed a once lackluster team which was overshadowed by schools’ football and basketball teams into a powerhouse. He allowed Perry Hall to make a name for themselves in the running world as he led the gators to an impressive 38 Baltimore County titles in 31 years. From 1974 to 1999, Perry Hall Cross Country and Track and Field gave everyone a run for their money.

When Jerry Martin began coaching at Dundalk High School, one of his first achievements was leading the team to defeat Dulaney in the county relays in 1972. This was one of the first times anyone had put a dent in Dulaney’s armor. Bob Dean, Dulaney’s then head coach had led the lions to become Baltimore county’s leading power and Martin knew taking him down would be no easy feat. But when he left Dundalk and began his coaching career at Perry Hall in 1974, he never strayed from his goals.

He slowly transformed the Perry Hall program to become one of the toughest in not only the county but also on the state level. He coached the Cross-Country team to 12 straight county titles from 1986 to 1997 and pushed his track teams to a total of 21 county championships. Martin also often lead the men’s team to strong showings in the regional and state meets.

Martin was tough on his athletes as he put them through grueling workouts and always kept them on their toes, as the workouts were different every day. However, he was notably the most hardworking man anyone was ever known, which led him to become a role model to so many of his athletes. No one had anything bad to say about Martin during his tenure as head coach.

“He was a terrific person, always super enthusiastic about his runners and track. His great strength as a coach was his enthusiasm,” said one of his former athletes from Dundalk on a memorial conversation thread about Martin following his death.

How many coaches do you know that would be willing to wake up at the crack of dawn each morning to coach the pole vaulters before school? Just so they can stay late after each and every practice until the last athlete has left. All while working as a physical education teacher and as an employee at a retail store. Probably not many. And the list contains even fewer when you mention that he had a wife and 6 children yet still managed to dedicate enough time to coach such an accomplished program.

It’s hard to put into words the great extent of Martins hard work and dedication. Not much better sums up his accomplishments and character then the message found on the plague leading up to his memorial track at Perry Hall High School: “Coach Martin Memorial Track. Named in honor Gerald L. Martin whose dedicated service to student athletes reached well beyond the track. During his tenure, Coach Martin trained countless champions as well as developed pride and character in all of his athletes. Loyal, modest, knowledgeable, compassionate, and competitive, coach Martin leaves a legacy rarely matched on the track. Dedicated Fall 2009.”